Tim Berners-Lee was born on 8th June 1955 in London, England. After doing his A Levels at Emanuel School, he went to Queen’s College, Oxford University, where he received a first-class degree in physics. In 1980, while working at CERN, the European Particle Physics Laboratory in Geneva, he first described the concept of a global system, based on the concept of 'hypertext', that would allow researchers anywhere to share information. He also built a prototype called 'Enquire'.

In 1984, Berners Lee returned to CERN, which was also home to a major European Internet node. In 1989, Berners Lee published a paper called 'Information Management: A Proposal' in which he married up hypertext with the Internet, to create a system for sharing and distributing information not just within a company, but globally. He named it the World Wide Web.

He also created the first web browser and editor. The world's first website, http://info.cern.ch, was launched on 6 August 1991. It explained the World Wide Web concept and gave users an introduction to getting started with their own websites.

In 1994, Berners Lee founded the World Wide Web Consortium at the Laboratory of Computer Science (LCS) at the Massachusetts Institute of Technology in Boston. He has served as director of the consortium since then. He also works as a senior research scientist at LCS which has now become the Computer Science and Artificial Intelligence Laboratory.

Sir Tim has received multiple accolades in recent years. These include receiving the first Queen’ Elizabeth Prize for Engineering in 2013, election as a Fellow of the American Academy of Arts and Sciences in 2009 and being knighted by H.M. Queen Elizabeth in 2004. He has received over 10 honorary doctorates, is a member of the Internet Hall of Fame, and was awarded the Finland Millennium Prize in 2004. In 2007, Berners-Lee was awarded the UK’s Order of Merit – a personal gift of the monarch limited to just 24 living recipients. In 2012, he played a starring role in the opening ceremony for the Olympics, where, in front of an audience of some 900 million, he tweeted: “This is for everyone”.

In June 2009, then-British Prime Minister Gordon Brown announced Berners-Lee would work with the UK government to help make data more open and accessible on the Web, building on the work of the Power of Information Task Force. 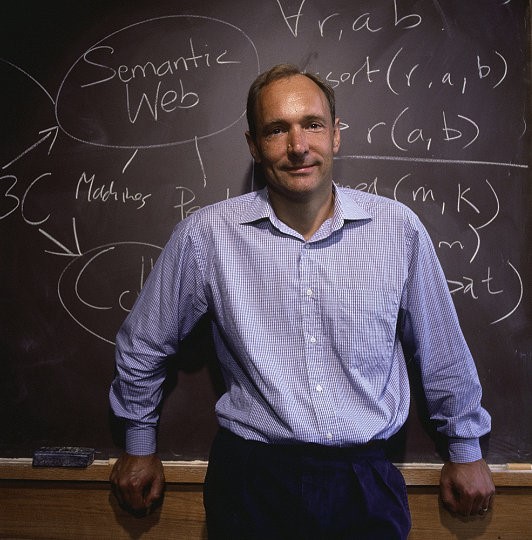